OPC: What made you find interest in the entertainment business? And what has your journey been like?

R: I wouldn’t say I had any initial interest in working in the entertainment industry. I first started out working [at a company] with a friend of mine. Her father was the human resource director there. One of the women that worked there was going to be going on maternity leave, so I was initially supposed to just fill in for a few months. Then it turned into a full time position and then I got a promotion. It was a [wrap] from [that point on] but the fashion industry was something different. I think I decided I wanted to work in that industry when I first heard the quote “when you do something you love, you will never work a day in your life”. So I kind of thought about what would be the one thing that will never get old and I will never get bored with. [Of course the answer was] shoes.

OPC: How does it feel to say that you have been the owner of multiple businesses?

R: It feels overwhelming but it feels that there will be great rewards in the end and I learn a lot every day. I love it, I love being an entrepreneur. I love that I don’t necessarily have to be directed by anyone anymore. I can make my own visions come to light. It’s a lot of work but I still love it.

OPC: When someone thinks of your new shoe line Encore; where did the idea come from? And what can they expect?

R: I would say my vision with it was the everyday working woman and to make sure that there were styles that were trendy and comfortable. As opposed to woman that are just like me, fashion savvy but also who may not be able to afford a thousand dollar pair of shoes or this three hundred dollar pair of shoes but still don’t want to compromise there look because their on a budget . Its cost conscious and budget friendly but it’s still fair.

OPC: So I heard you are now the CEO of 5 Approved, a Promotion and artist development Company. Is there anything we can look forward to?

OPC: Which celebrities have used your promotion company’s services recently?

R: All that’s recent Cherry Martinez and Shaheed Moore he plays for the Broncos [as a safety].

OPC: What do you have to say to all the people that feel that Love and Hip Hop is a negative show?

R: I don’t really concern myself so much with trying to revamp peoples thought process. I think for us it’s an opportunity and a platform to promote ourselves and our businesses. It’s like anything else, there’s good and bad with it. You could have a job, working a 9 to 5 you’re a corporate person, there’s good and bad that come with those positions. You have to make the best of it. Everyone just wants to be successful. That was my ultimate goal for the show. I don’t really care too much to read peoples thought process because there’s a lot of viewers so whether it’s negative or not people are definitely entertained and tuning in. 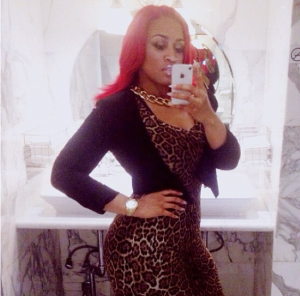 OPC: So I heard you recently got married?

R: No, I am engaged. [Planning for wedding to be in the summer]

OPC: Are we ever going to see who this mystery guy is?

OPC: Can you describe yourself in three words?

OPC: What advice would you give to young adults trying to make it in the entertainment industry?

R: Definably educate themselves in whatever field they want to be in. Because you know what you’re doing and no one can really take that from you so research, research, research and go for it. I don’t think they should hold back, just do it.

OPC: Is there anything else your fans can look forward to in the near future?

R: Just more shoe business. I want to make a household name. I want Encore to be able to stand on its own.

OPC: What do you want your legacy to be?

R: I would like it to be that I was highly ambitious. I went against the odds and I proved people wrong.

Doing this interview with Rashidah was really fun. She was an absolute sweetheart. I look forward to speaking with her again in the near future. 🙂